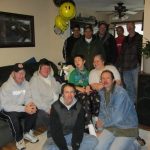 Nick, 11, has quadriplegia from a traumatic brain injury he suffered two years ago.

His mom wrote: “Nick has always loved his animals. We have a hobby farm. Until his injury, Nick loved to take care of his chickens in the yard, his pony in the pasture and his goats running around. If he could have a deck, Nick could watch them and enjoy the outdoors! We would love to be able to sit with him together as a family outside, relaxing and enjoying his farm animals. We would be so thankful for this dream for Nicolas.”

Sunshine Foundation provided the funds for materials and Honeywell employee, Debbie Orock volunteered to gather a group of friends and neighbors to construct the ADA accessible deck and ramp!

Thank you to the wonderful volunteers who are volunteering their time to construct Nick’s deck and ramp. Dreams come true because of people like you!

Sunshine Foundation, members from its All-Volunteer Minnesota Dream Catchers Chapter, and neighbors from throughout the Baldwin, MN area will join together this week end to make a young boy’s dream to sit outside on his back porch and watch his family’s goats and chickens come true. Just in time for the Thanksgiving holiday!

Nick’s world turned upside down in September 2009 when the side of his mother’s van was hit head on by another vehicle. He suffered a severe traumatic brain injury that left him unable to move his arms and legs or speak. The once active and happy boy who loved being a part of the 4H Club and following his older brother around was struggling just to survive. It wasnï¿½t until his favorite dog, a Coon/Labrador mix named Zoe visited him that his prognosis began to improve. He spent seven months at Gillette Children’s Hospital before he was permitted to come home.

It has been an adjustment for his family, but they refuse to allow Nick’s injury to adversely affect their lives. Nick is a happy young boy who laughs at funny things and loves watching the Sound of Music. His mom and dad stay positive and they do everything they can to help Nick’s prognosis improve, to stay active and involved and to have a chance to enjoy the outdoors and animals that he loves without having to worry about being bitten by mosquitoes.

Sunshine Foundation donated the funds for the deck’s materials and Honeywell employee, Debbie Orock volunteered to gather together a group of friends and neighbors to pitch-in and help out with the construction. According to Debbie, a long time supporter of Sunshine Foundation,
“We should be able to help neighbors out – especially when they are in the next town.” The project will join together the upper and lower decks, provide a screened in porch area for Nick and a ramp to make the new deck entirely ADA accessible.

For Nick, this is another event that is starting to help turn his life around. His eating has improved, he can use his left hand, and is beginning to use robotic legs to help promote the signals coming back on the right side of his body. His parents are hopeful. According to his dad, Joe , “Nick has a great disposition and he doesn’t get depressed. He has hope and there is no better Thanksgiving message than that.”